I've gone through the edits the outside editor suggested and made adjustments as I could. There were good suggestions, not even new ones, just ones I hadn't completely managed to achieve yet... it's growing stronger. But that's the easy part...

When I submitted Game Plan to Fierce Ink, it was 128,248 words long - but that included the cover page and my name and stuff. When we discussed contract, the lovely ladies suggested a word count around 100K would be more reasonable. Reasonable for whom? Through my first two edits after the contract I was able to slice away 20K! TWENTY THOUSAND words! That's like cutting off a right leg. I thought they must be happy with that effort, right? Wrong. Cut more, they said... did I call them 'ladies'? Slave drivers more like it. Tortuous sadists. SW (the secret agent editor) trimmed another 2000 or so off before handing it back to me. I've been whittling words away, in twos and threes, slipping closer and closer to that magic 100K mark.

I think maybe my dad's suggestion of just counting through the doc and cutting every eleventh word would work just as well.

Posted by Unknown at 8:54 pm No comments:

I received Game Plan back from the Outside Editor whose secret code name is 'SW' to protect her identity from the authors whose lives she destroys.

It's actually not that bad.

Which means my twenty days of floating are over and it's back to business for me... we're in the home stretch!

My first step is to reclaim my MeStation and make it ready for writing: 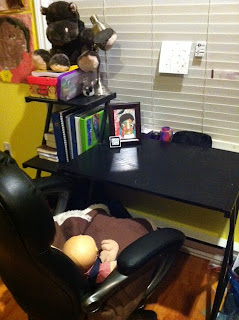 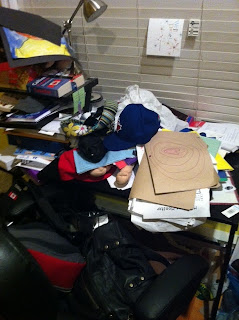 Yikes. Much better and back to normal. 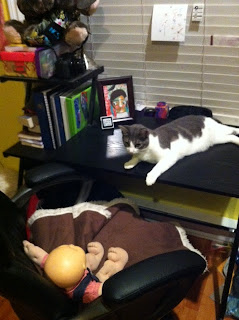 Tomorrow I'm plunking myself down there and pecking away for hours...

Game Plan has been in the hands of the outside editor hired by My Pub (teehee - still will squeeze that in anywhere it fits). I'm assured she's not Scary. The revisions are/were due back tomorrow, but apparently my story needs soooo much work, it won't be done until Friday. Okay, that's not what they told me but it's certainly how I interpreted it because obviously it's all about me, right?

Actually, it's a bit of a relief and a good thing... tomorrow I have to try to be productive at my day job. If I were expecting the imminent return of GP I'd be struggling to concentrate. This way I can obsess about it all day on Friday :)

Email ThisBlogThis!Share to TwitterShare to FacebookShare to Pinterest
Labels: Editing

I mentioned I was waiting... and some of my waiting is over.

I got my 'thanks but no thanks' letter in response to the grant I applied for back in May. I've applied now three times and gotten this letter - pretty much word for word the same - three times. Ouch.

There's a lot of risk in this writing thing. You know that dream where you show up at school naked? Well it's not quite that, but there are a lot of similarities. To write a book - well, not all books, those 'for Dummies' books probably don't count. Or cookbooks - but to write most other books you have to lay out words that are sprinkled with bits of yourself. Ew. That sounds gross. I mean to write a book that is relevant to readers, something that people will CARE about, you have to put something relatable in it. You have to show yourself. And not the macho tough self, unless you are writing for macho tough readers. So while I expect to be fully clothed at any public sharing of Game Plan or The Second One, each time I share it with someone - or anyone - I'm exposed.

So I wrote an application asking for funding. Showed them a little bit of my story (of me). It's tough to keep it objective. Of course there's nothing personal - they filter through piles of applications and only have so much to give out - but when I read that 'thanks but no thanks' letter, it takes a lot of effort to remember that.

Bottom line is, it doesn't change anything. I don't write stories to get rich (though that would be nice, eh JK?) so receiving funding only makes things easier. There's always next time.

Email ThisBlogThis!Share to TwitterShare to FacebookShare to Pinterest
Labels: Grants

Book Launch - A taste of what's to come

So I'm told that not all books are celebrated with a book launch but Fierce Ink Press has made a practice of doing so with the books they publish. YAY! and YIKES.

Last night I attended the book launch of Membrane, by Carol Moreira. It was held in a coffee shop where I sipped on Blueberry Italian soda. There were itty bitty cupcakes with itty bitty prints of the beautiful cover. Colleen, of Fierce Ink Press did an intro and then Carol said somethings and read somethings. It was very cool, and very scary.

I'm currently lobbying the idea that I should attend the launch for Game Plan incognito. I'll wear a big plastic nose and sit in the back. Someone else can read. Someone else can talk. Someone else can stand in front of everyone. There's a reason why writers like to write. It's very comfortable for me to hide at my MeStation desk and type away at a computer instead of talking to everyone.

SO while the launch was super cool, it was a little daunting to see what will be coming up for me in November. I'm terribly excited about it, and I'm terribly terrified at the same time.

Remember when I sneakily alluded to changes being made to Game Plan above and beyond the awesome edits?

I can be less sneaky now. We've moved up the publication date!!! It had been planned for January 2014, but now it's coming out in November 2013 - just in time for Christmas.

Email ThisBlogThis!Share to TwitterShare to FacebookShare to Pinterest
Labels: Release

For the past few years I've worked pretty consistently on two projects - Game Plan and The Second One (don't have a title I like for that one).

Game Plan just went back to the publishers last week and to an outside editor today - whom I'm told is very nice, not scary at all, we'll see about that. I get it back July 25, which feels like a lifetime right now.

The Second One has been submitted to publisher, and I'm waiting to hear back from them to know if it's a good fit. I love it. But every mother loves their ugly child too, right?

I applied for a grant through the Dept of Communities, Culture and Heritage in the NS Gov't. I've had two rejections so far so the current application may be as much an effort to out-stubborn their jury as it is an attempt to gain financial support for my fledgling second career.

In summary, I'm waiting. I should try to be productive while I'm waiting but I'm a full time waiter... I think while I wait and I think about waiting and I wonder and worry and stress and fret and whatif every scenario and I don't get anything done.

SOOO, a lot has happened, even though there's not much I can tell.

Something super cool is in the works (no, not a movie deal, not quite that super cool... yet).

But a side effect of the super cool was the need to have my edits in THIS WEEK so that's all I've been doing the past couple of weeks - I worked my day job, humoured my kids, and then settle in to my MeStation to poke away at the keys.

It's morphing into something bigger than I ever imagined.