I'm learning there are certain events that act to legitimize this effort of mine to carve an existence as A Writer (capital A, capital W). Typing "The End", signing on with a publisher, working with an editor that is not MS Word Spelling & Grammar check, seeing the cover (still my favourite), holding a real book, finding it in the library or bookstore, hearing a review outside the obligatory readers (family and friends)... so last week I got to check another off my list. Aptitude was chosen as the Editor's Choice and reviewed in The Quill & Quire! 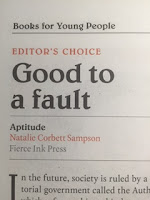 The review will go online after a few weeks, but I've got my hardcopy to stare at now :) The editor, Dory Cerny, spent the first half of the review setting the story up and explaining some of the background, then she jumped into the fun stuff — her opinion of the story! She used words like "complex", "delightful", "lustre" and "vividly" and finished the review by saying: "Sampson's dystopian tale is a multi-layered and thought-provoking examination of the concepts of free will, duty and what it means to truly love someone." She got it.

Running out of Gas

This morning started later than most as it was Steve's morning to get the kids to school almost-on-time. I got up and walked the Devil's Spawn of a dog, then walked the girls to the bus stop, then drove them to school because we missed the bus (at both bus stops). I raced home to do a couple tasks and run an errand before meeting at the school to discuss bullying and how not to let my kid bully others. Great convo. Seriously. Then I ran home to pick up some necessities before my next meeting and realized i didn't have my wallet. A call to the office determined it was there, that's fine, a stop on my way to my 11 meeting is doable if I leave now. Race off again, to the office, grab the wallet, back on the road to my meeting, through traffic and up onto the highway and then... the car died. Died. On the highway. 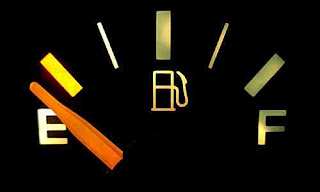 I'd known I was pushing it, had squeezed the fill-up in either just before or just after my 11 meeting that was at a Starbucks beside a gas station. The extra stop for the wallet wasn't that big a difference right? Wrong. Who knows if I'd have made it without the roundabout route.

And as I sat on the highway watching traffic fly past me (and conducting a work meeting by phone since, hell, what else was there to do), I realized it was kind of poetic in a nasty way - I tried to jam one too many things into my morning and the means of my travel cut out. kaput.