Hat's off to Amy!

How awesome is this: CLICK HERE BUT COME BACK!

I can't tell you how impressed I am with this idea.

Someone twitted at me early this morning (that's how I stay current with the lingo, yo) that she was reading my book. Okay, she wasn't twitting at me, she was twitting to the rest of the twits... wait... she sent a tweet saying she was reading my book and included my 'handle' (that makes me feel like a cop) so it beeped on my phone. I thought 'Cool! My most awesome of awesome publisher-publicist found another blogger to review Game Plan' and didn't think much more of it until I asked who she was and how she'd come to have Game Plan for review. And then I was directed to Amy's page.

In honour of Terry Fox and Rick Hansen, two great Canadian heroes, and in support of The Canadian Children's Book Centre Amy is 'reading across Canada'. She has decided to read ten pages per kilometre and to do that, read a book a day for the year of 2014. How coooool is that? I think it's a fantastic idea and I can't wait to follow along.

Have a look for her on Facebook and on Twitter if you're interested in following. I'm nervous now that she is reading or read Game Plan today... I really hope she liked it. I'm so honoured to be a teeny (well 1/365th) part of this project.

I was so excited to participate in the BlogHop for Aussie Owned & Read! It's always cool to participate with other writer types. Scroll waaaay down to see the other blogs that are participating and enter a give away to win a copy of Game Plan or some other awesome prize.

The prompt we were given was to write about an Australian author or book, 'anything Aussie', which offered up the first problem because a quick Google search revealed I hadn't read any Australian authors. The second problem is apparently I can't do timezone math and was away for a hockey tournament so my blog entry is late - hopefully not too late! (Sorry!)

Can't solve the second problem without Hermione's time turner but the first problem solved itself. I started a book late last week and as I read I realized the 'countryside' wasn't US and the cities weren't American. It really hit  me when the characters needed an 18hour flight to get to New York - wait a minute. I double checked and one of the details I had glossed over is the home city of Melbourne. FYI that's in Australia. A search on GoodReads discovered the author claims to be a New Zealand born Astralian. Lucky Break!

The Rosie Project by Graeme Simsion is a novel that hit close to home and close to the heart. It's narrated by Don, a professor of genetics who initiates a research project to find the ultimate match for his wife. Don himself knows he's different, acknowledges he's socially awkward and inflexible but doesn't make that next step to realize the characteristics of Asperger's he discusses in his lecture line up well with his own traits. Then Don meets Rosie, a woman who fails his questionnaire in every aspect but who catches his attention. There's nothing surprizing about the story, but it's sweet predictability is comforting and safe - the perfect relaxing read to curl up with on a weekend afternoon.

There wasn't much in The Rosie Project that made it stand out as Australian. In a few places Simsion compares language of Aussie's and Americans - elevator vs. lift - and I caught a few reference to 'jumpers', but there was no room in the story or the character for a discussion on Australian history or architecture in Melbourne. It would have been nice to learn more through the book, but not at the expense of a story that is pretty close to perfect as it is.

Thank you for including me in your BlogHop and for forgiving this Canadian for being tardy in my contribution. Go get a copy of The Rosie Project next time you want a story that goes straight to the heart without extra brain effort.

Email ThisBlogThis!Share to TwitterShare to FacebookShare to Pinterest
Labels: GiveAway

My van needed work before I drive it and three Demons to Moncton next weekend for a hockey tournament. As much as I try to prioritize M/F as 'writing days', the evil truth is it's easier to take time from non-paying job days than it is from paying job days - so Monday often gets sucked into doctor appts, kid appts, car maintenance.

This am I dropped the car off, intent on sitting in their too soft sofa with my computer and ignoring the bustle around me to get some work done... but they have a shuttle! So I asked them to shuttle me to Starbucks. Not the one in the mall, though that was my first choice. Not even the one in Chapters, b/c honestly if I were in a mall or in Chapters, I don't suspect I'd get much work done. So, I'm sitting in a teeny drive through Starbucks wondering how long I'll last before I walk across the street to Wendy's and their over sized diet Coke.

Suddenly I find myself in a snooty coffee shop with my computer on their wifi and my outline in my bag ready to start writing it out... and even though I've spent a week in Banff, I've gone through the publishing process once, I've self-pubbed a short story, I've done a book launch and booked a 3-city book tour... I feel like a writer today because I'm in an uncomfortable chair at a table that's dangerously too small for my puter and my bitter hot chocolate listening to dumb music and random conversations. And I miss my pup and kitties.

Step away from the computer...

I don't think this one is. I've got three voices, several scenes and one day - I think. One day to tell, not one day to write. And I'm hoping it's one of those stories where everything only becomes crystal clear at the end, but for that to work it needs two things: 1. NOT be obvious in the beginning and middle and 2. Be totally obvious at the end. That 'I see dead people' moment that Bruce Willis and the rest of us totally missed. 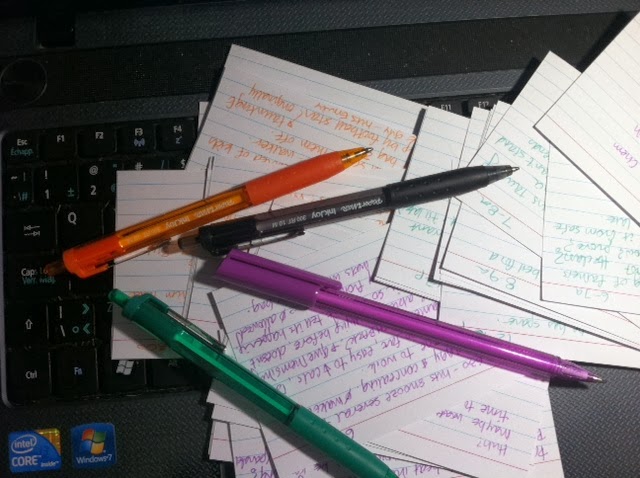 So I've spent my morning doing something I've not done before. I'm writing an outline. Egads. I *thought* I wrote outlines before - Word document charts that had chapters or months and listed the general events of that chapter or month, but this is a REAL outline - complete with coloured pens and index cards. It's been kinda like taking notes in a hard course - no idea wtf the teacher is talking about up there, frantically writing trying to glean any sense whatsoever and then having that moment when I go "OOOooh, now I get it" and realize the whole package just clicked into place.

Maybe not the *whole* package, but more than was there this morning.

And the unexpected side benefit? When I'm not working ON the computer, I'm much less likely to be distracted by Facebook. That pretty much doubled my productivity right there. I need more diet Coke.

Meeting of the Minds - or stomachs

Back in November some of my bookie peeps hosted Book Camp Halifax. It was a day of discussion about everything books - writing, editing, submitting, publishing, reading, etc. I was on the committee to help out but didn't do much so I felt a bit guilty when I was included in the 'celebration' to meet and debrief over supper last night but, hey, there was food so I went.

I'm kinda busy. I work so I talk to people there - the parents I work with, the colleagues and friends I have there. I drive my kids to bball and hockey so I talk to people there - other parents, mostly, about how awesome our kids are. I have my bookclub ladies - we meet once a month and I have a few friends who also manage to escape our responsibilities once in very long whiles to go to dinner and/or a movie...

But it's only been through the process of editing and publishing Game Plan that I've collected (Kamy) some friends who like to talk about the whole writing thing. It's a different kind of energy that seems to fill up my stores and push me forward.

And kinda makes it real.

All that and there was good pasta too.

Reviews make the World Go 'Round

What makes you read a book?

the cover? the author's name? the description on the back?

I am a follower, a reading-stalker even. I read books my friends read and say are good, especially when I've found that we have similar tastes and make similar choices. That's one reason I LOVE GoodReads - have you tried it? Word of mouth is a strong way for books to grow and reviews are important for that. When it was released Game Plan was reviewed by several bloggers in a 'blog tour'. Those were the first 'unbiased' reviews I got - from people who had nothing invested in the book or in me. It was nerve wracking to say the least... then exhilarating and rewarding and humbling.

Now that the publishing and the release are done the real work is spreading the word - shaking the trees for more readers. I'm headed to Vancouver, Saskatoon and Toronto in March to do just that. My Publicist Extraordinaire is working on finding me some gigs to meet and talk to readers and get Game Plan out there. And hopefully I'll hear more good stuff about it as it spreads.

A long lost ghost from my past - one of my favourites - has come back to haunt me from Nfld and coerced her bookclub friends into reading Game Plan. One of her friends has written what is perhaps my favourite review so far:

Ok if a good book makes you bawl (several times) reminds you of falling for a boy, remind you of your children's births.... And how much you really don't want to kill them.... Than this was a good book.
Isn't that great? I might have teared up a bit reading it.

SOOO if you liked Game Plan, spread the word - add a rating and/or review to Amazon or GoodReads, hand it to a friend, recommend it at work... Please!

Sooo, I haven't written a thing all night but I have revamped my blog. Good, productive procrastination don't you think? If this writing gig doesn't work out I could learn how to be a web developer?

Sooo, it's a new year. So far it's quite similar to the last. 2013 was pretty cool for me - a book deal, the editing process and a publication! And I'm stuck after that sentence because it started with a number. I'm resisting the urge to go back and add words like 'The year' or something. Now the blog entry is deteriorating into a neurotic ramble of my instability...

I've been staring at the computer for a bit, waiting to jump. I have a new idea but without the foundation of a Start, it's hard to push myself off the Blank Page ledge. There's really nothing to do to make it easier but to jump - to start typing. I know that, but...

Off to jump, I guess, before my procrastination shows too much of my mental issues.