Merry Christmas! One of the guaranteed presents around here is books - everyone gets at least one in their sock, and maybe more under the tree. Here are a few of the books shared this year:

Then I went on the Kobo Boxing Day sales and got these ebooks:

So I think we're all set for reading in the new year!!!

What are you reading? 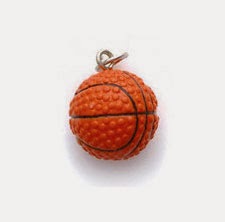 The holidays are here!  While I can't give every one of you a present I DO have super cool basketball charms that I’m itching to give away. How can you get one?

Show me the copies!!!

Post a picture of your copy of Game Plan – the paperback or the cover on your eReader – on your Facebook wall with a link back to Natalie Corbett Sampson and you’ll be entered in a draw to win one of three basketball charms and signed Game Plan post cards.

If you tell me in your post which publication from Fierce Ink Press you’d like to read, I’ll send it to you if you win!  (I’ll draw the winner by random.org) Find the titles and descriptions at the Fierce Ink Press Shop.

Post the pics by the end of the year :) to be included so you can start 2014 with a new great read and a cool basketball charm.

Fine print: If you live in the US, I can't send you The Night has Teeth or The Night has Claws... but you're welcome to anything else!
Posted by Unknown at 2:00 pm No comments:

I'm looking for a new project. Game Plan is out. UntitledSecondBook is sitting in the publishers' submissions pile. I need to keep writing. I've considered doing some shorts but lacking ideas.

It's hard to find something new. Are there any new ideas out there any more? How many ways can Romeo and Juliet be told? And relevant. It has to mean something and be interesting. And worthwhile. And that's all before it's a good story. It's daunting to start again.

But I'd rather not start from a blank page. I think I'll sit down and type out something and see if it goes anywhere... kinda backwards but...

It's Friday again - the weeks seem to go by faster and faster!

It'll be a while before I hear anything - everybody is going into the holiday season so I'm sure it'll be after business ramps back up in January before they get to it. I don't remember stressing about it last year (I submitted Game Plan in November and heard back in January), but that was likely b/c I didn't expect much from it.

And the question becomes - what do to in the meantime? I have a couple of ideas but neither feels like a really great idea worthy of a novel. I think that's why I like writing novels instead of shorts - coming up with worthy ideas is the hard part for me. Once I have an idea, growing it out and in, finding the details and describing the situation, building the characters - that's all fun. It's coming up with an idea that is tough. It needs to be worthy - relevant, interesting, new (well not new, nothing's new is it? But newly packaged)... It doesn't come easy to me.

I think I may come at it by a character this time... I have a few that are lurking in the shadows in my head. Sounds kinda crazy no?

Today I get to go by Woozles to drop off a few signed copies of Game Plan! I'm excited it'll be on a real shelf. A real book on a real shelf. How cool is that? So if you want a copy of Game Plan and are downtown Halifax check it out there - would be great if they sold out and had to order more! ;)

I have 17 pages left in the UntitledSecondBook to edit before I throw up and send it off to the publisher for a submission. It's not any easier this time. In fact, I think it's harder. When I submitted Game Plan it was a pie-in-the-sky shot - nothing to lose, might as well send it. But now that I've published one book, I feel like I'm tediously treading on shaky ground - is a writer still a writer if no one wants their second book?

It's 8:26am, the house is quiet enough that I can hear the heat pump and the dryer. My fatcat Abby is perched on my left leg, Luna is on Rookie's launching pad on the floor (he needs the pad there to jump onto the bed) and Rookie is snoring in the living room by the door. I have no idea why he won't sleep in here when I'm home? My tall glass of Diet Coke is half gone, but still cold - the bubbles are popping at the surface. The lights are down, but my desk lamp is on, spotting the computer. The clutter that lands on my desk through the weekend has been cleared away so that only my old Cabbage Patch doll, Danielle Daniel's  Brave girl print and Brett Lawrie (the bobble head version) are watching me...

I've got the whole day ahead to tie up loose Game Plan strings and soak in UntitledSecondBook edits.