Up Super Late Reading THIS: 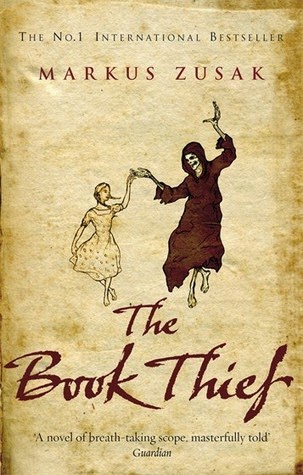 I finished a little after one last night - this morning? Not that long ago. My copy is the movie picture release that was super cheap at Costco, I like this cover better.

Is there anyone out there who hasn't heard of this story? It came out as a movie in November though apparently I totally missed that fact and had planned to go see it when it was released now that I'd read the book. At least I'll save money if I watch it from home.

I find books about the Holocaust hard to read. Gripping and intriguing but hard to read. This was no different. The story is told by Death, who is a sad, exhausted, empathetic creature who seems truly heartbroken over what is happening in WWII Europe. The main character, Liesel, first loses her communist parents to Hitler, then her brother dies on a train. She settles into a new life with foster parents Hans and Rosa, spends her time learning to read and playing soccer with her best friend Rudy and the kids on Himmel Street. She keeps the secret of Max, a Jewish man hidden in the basement and steals books by climbing into the Mayor's house through the library window.

The story is a haunting balance between the reality of daily existence for any ten year old and the devastating way Nazi Germany tainted the lives of everyone. Early in the story Liesel is embarrassed and bullied because of her poor reading skills. Her foster father teaches her to read, building both her skill and their bond. Books, both reading and writing, become a central part of Liesel's life. She recognizes the beauty of words in the stories she reads, the books written for her by Max and ultimately her own story written in the basement and kept by Death. At odds with that appreciation is Liesel's realization that words are what give Hitler his power and his dominance. In WWII Germany words are used to pelt hate and perpetrate fear. What's truly magical is Zusak's creative use words to build images and express emotions.

So if you're looking for a book to read, and you've read Game Plan once or twice, this is a good choice. It took a while for me to work through but it wasn't laborious, I was careful to pick up every detail and appreciate each trick of the words.